The Best Video Slots at the Online Casinos

When video slots first came into being in 1975, they completely revolutionized this genre of gaming. Although it took a bit of time before they were widely accepted, once they were, many new and exciting developments followed.

Combined with the use of computer software, the possibilities were endless. There was suddenly greater accessibility, more variety, and higher prize money. Multiple paylines were introduced, and this allowed for bonus features in many different variations and themes.

The games could now be connected across a network, and this gave rise to the era of progressive jackpots. Since then, the collection of titles has grown considerably, and so has the number of players embracing these versions.

The Slot Technology that Paved the Way for Online Casinos

The video slot machine made its first appearance in the mid-seventies when Walt Fraley invented the ‘Fortune Coin’ game. This one differed from earlier models, by moving away from physical reels and into versions that were displayed on a screen. This was made possible through the changes in computer technology, and the earlier invention of electro-mechanical machines.

In 1976, International Game Technology (IGT) bought out the manufacturer of Fortune Coin, and then developed its own series, making changes to the design and functionality of the original version. This use of software paved the way for the future developments. By the 1980s, video slots were mainstream, and shortly afterwards, casinos found their way online.

Slots are overwhelmingly the most popular genre found in the online casinos. With so much choice available, the key is to find a varied selection of top-rated games. Some software providers have a better reputation than others for producing the video versions.

Most notable in this field are IGT, NetEnt, Playtech and Microgaming who have all acquired a good reputation for producing quality products for both desktop and mobile users. Their titles are renowned for providing innovative play, along with lots of lucrative bonus features.

Video Slots and the Pay Tables

Video slots might seem a little daunting initially, especially for players who are new to online casinos. There are all kinds of special features, payline options, and additional quirks that can be confusing. Fortunately, it’s all a lot easier than it first appears. Before commencing play, you should always read the payout table. This will explain the winning combinations and how much will be paid out for each one. It will also provide information on the wild and scatter symbols, and reveal how many will be needed to start the bonus feature. This is very often awarded as free spins, but there are many variations on the themes.

How to Play Video Slots Online

Before you begin, you will have to decide how much money you want to stake. You can adjust how much you will wager on each spin by using the – + button to raise or lower the amount. This will be mainly decided by the pay table rates, but you should also consider the type of game you are playing. In a lot of cases, you’ll need to bet on all the paylines to be entitled to the jackpot. Once you are ready to go, press the [SPIN] button. You can also select the [AUTO] play option.

From here, you will be able to choose how many spins you want, and that number will be carried out automatically. It’s advisable to keep a steady pace as you play, so that you can maximize all of the opportunities that may arise as the game unfolds.

Some Special features of the Video Slots 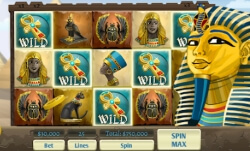 The majority of the video slots contain one or two features that make it unique from other games. There are, however, some functions that you are likely to come across, and it can be useful to have an understanding of these before you begin to play.

The introduction of video technology has proven to be a significant development in the history of the slot machine, and the advances in software have made it possible to develop the huge variety of titles that we see today. An increasing number of people are turning to the casino for their entertainment. Video slots are currently the most popular genre in the venues, and they have contributed much to the online gaming movement. With these types of games becoming ever more sophisticated, this trend is likely to continue in the future.